The writing on the wall destroyed

As we ease towards the Summer Semester, we are delighted to invite you to a talk by Jacob Bard-Rosenberg, hosted by Annenstrasse 53, in collaboration with IZK - Institute for Contemporary Art at TU Graz.

This will take place in a  hybrid format at Annenstrasse 53, and online

“Use whatever reaches you with caution./ Yellowed books, fragmentary reports/ Are my sources.” This warning introduces Bertolt Brecht’s Svendborg Poems, written from his exile in Denmark during the 1930s. One of Walter Benjamin’s final works was a set of commentaries that attempted to deduce the political and social content of Brecht’s lyric works. This talk will address some architectural (and anti-architectural) dialectics that rebound through Brecht’s poems and Benjamin’s criticism of them. It will focus in particular on images of slogans inscribed on walls of prisons and of borders. Amid the rubble of those walls, now destroyed, it will interrogate the relations of this writing to law and criminality, and consider a communist poetics of transmission through catastrophe.

Jacob Bard-Rosenberg has recently completed a PhD on dreams, memory, and forgetting in Adorno and Benjamin at Birkbeck College, University of London. For the last five years he has worked running an archive of social movements, activist ephemera, and radical art at MayDay Rooms in London. He is currently living transatlantically, occasionally translating obscure texts, and scrawling footnotes about 1930s communist writing. 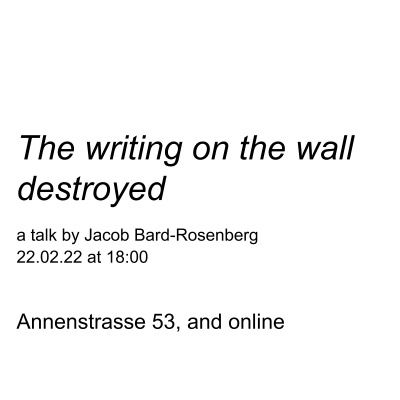