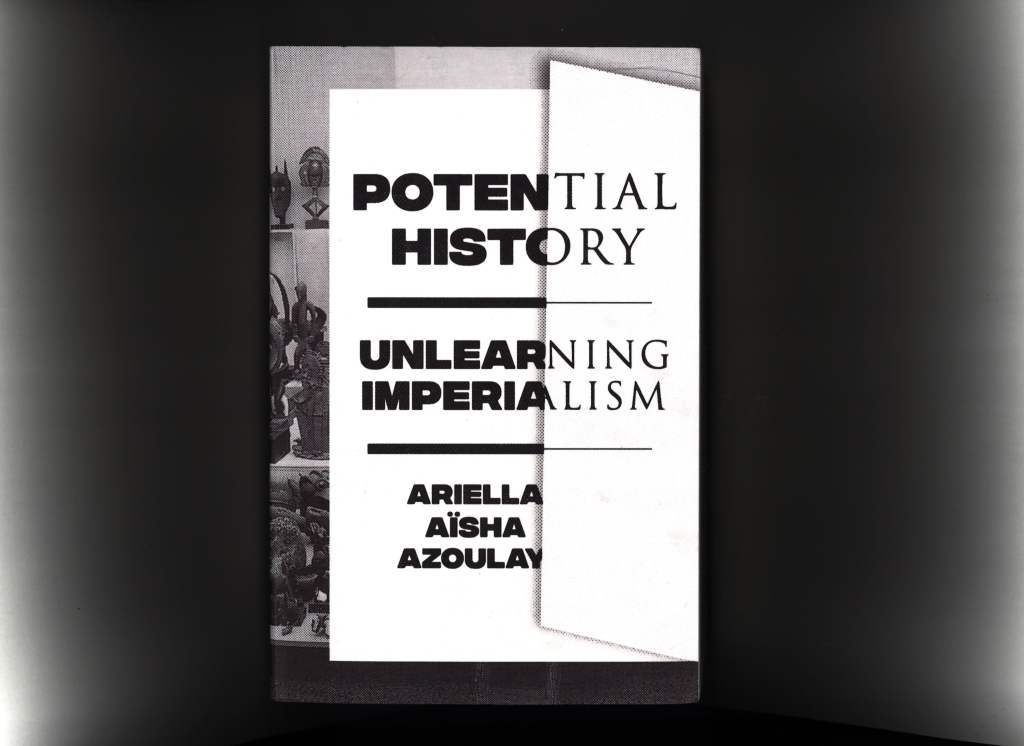 Annenstrasse 53 is an independent Exhibiting Space that mirrors and exposes discourses, ideas and  teaching, taking place at the IZK – Institute for Contemporary Art at TU Graz. By dislocating teaching, research and investigations from the university to Annenstrasse 53, we, the IZK Collective, actively work towards a praxis that questions norms and encompasses a process of ‘unlearning’ within our teaching, research, artistic production, and exhibiting. In light of this, we want to conceptualise and practice exhibiting as a continuous, open-ended process, as the deliberate refusal of temporal closure. By slowly adding and subtracting objects, publications, artistic works and conversations within the exhibiting space, we aim to establish discourses in flux, connecting topics and positions, in relation with teaching and student work. Within this flux we position research as an investigative, transformative process, transformative for all involved.

Confronted with an exhibition space caught between production and representation, we consider it highly relevant to investigate and simultaneously present the possibilities and tensions between virtual and physical presence. In light of the need for a viable approach to physical experience, we see this simultaneous investigation and exposure as emphasised by the pandemic with its long months of physical distancing, and the disintegration of society at large. In our view, this process can produce a moment of ‘unlearning’, bringing forth sites for investigative (dis)play, media manifestations, and collaborations.

As a pivotal step to establish and articulate this praxis as a public matter we announce an Opening Statement of this Exhibiting Space. We invite and align with Ariella Aïsha Azoulay, who will introduce and discuss her book Potential History: Unlearning Imperialism (2019) with scholar and author, Wayne Modest. Within this event, we will also host an online collective screening of Azoulay’s recent film, Un-documented: Undoing Imperial Plunder. The conversation and screening will take place at 18:00 CET on December 16, 2020 via Zoom, and the film will be simultaneously installed at Annenstraße 53.

Azoulay argues that the institutions that are constitutive of our culture and civilization, from archives and museums to ideas of sovereignty and human rights as well as history itself, are all determined by imperialist logics. She writes, ‘Imperialism has segmented populations into differentially governed groups, continually emphasized the possibility of progress while it tries to destroy what came before, and voraciously seeks out the new by sealing the past away in dusty archival boxes and the glass vitrines of museums.’ Our project at Annenstraße 53 aims to follow Azoulay. We ask what kind of understanding and approach to an archiving practice can ‘unlearn’, and even ‘reverse’ the dominant and imperial modes of engagement that determine our professional habitus and existing practices in photography and archival work?

Ariella Aïsha Azoulay is Professor of Modern Culture and Media and the Department of Comparative Literature, Brown University, as well as being a curator and filmmaker. Her work focuses on the violence of imperial boundary making and suggests a hitherto underrecognized relationship between documented cultural artifacts and undocumented migrants. Her recent books include Potential History: Unlearning Imperialism (2019); Civil Imagination: The Political Ontology of Photography (2012); From Palestine to Israel: A Photographic Record of Destruction and State Formation, 1947-1950 (2011); and The Civil Contract of Photography (2008). She is the curator of Errata, Fundació Antoni Tàpies, 2019; Act of State 1967-2007, Centre Pompidou, 2016; Enough! The Natural Violence of the New World Order, F/Stop festival, Leipzig, 2016; and The Natural History of Rape, Pembroke Hall, Brown University, 2016.

Wayne Modest is the head of the Research Center of Material Culture in the Netherlands, and professor of Material Culture and Critical Heritage Studies (by special appointment) in the faculty of humanities at the Vrije Universiteit, Amsterdam (VU). He has held visiting scholar positions at the Yale Centre for British Art, Yale University and the School for Museums Studies, New York University. Modest’s work is driven by a concern for more historically contingent ways of understanding the present, especially in relation to material culture/museum collections. His research interests include issues of belonging and displacement; material mobilities; histories of (ethnographic) collecting and exhibitionary practices; difficult/contested heritage (with a special focus on slavery, colonialism and post-colonialism); Caribbean Thought. More recently Modest has been researching and publishing on heritage and citizenship in Europe with special attention for urban life, and on ethnographic museums and questions of redress/repair. He has published Museums and Communities: Curators, Collections, Collaborations (Bloomsbury Academic Publishers, ed. with Viv Golding, 2013) and Museums, Heritage and International Development (Routledge, ed. with Paul Basu, 2013), as well as, ‘We’ve Always Been Modern: Museums, Collections and Modernity.’ Museum Anthropology 35 (1) 2012, among others.

A film by Ariella Aïsha Azoulay

Un-Documented shows that there is a strong connection between the plundered objects in European museums and the calls of asylum seekers trying to enter the countries of their former European colonizers: these are twinned migrations. The first migration is of the objects, generating professional care, scrupulous documentation, and generous hospitality in museums and archives: they are the (relatively) well-documented. The second migration is of people who do not have the documents that would allow them access to care and hospitality, and the documents they need to rebuild their homes and worlds.

The theft of people’s objects leaves them endangered. The forced migration of objects is not separate from the forced migration of people who are forced to seek a home in the places where their objects are preserved. As such, migrants and asylum seekers are falsely perceived “objectless” and deemed “undocumented” by border regimes. As the “undocumented,” they are denied free movement and unduly criminalized.

Against Alain Resnais and Chris Marker’s film Statues Also Die— Un-Documented argues that statues plundered from imperial exhibitions do not die. It’s true that those who plundered millions of statues and objects, isolating them far from their communities in museum vitrines, should be charged with the attempted murder of these objects. The objects, however, survived and still stand alert, even when they are confined to glass cases and imperial archives, awaiting reunion with their people, elsewhere or here. The rights of the “undocumented” are inscribed in the plundered objects themselves: colonizers stole not just statues, but rights inscribed in objects. Yet, the statues still live—and can be reclaimed and the rights inscribed in them renewed.

Voice and Music composed and performed by Edoheart

Voice and Music composed and performed by Awori

Voice and Music composed and performed by Moor Mother

The Opening Statement of Ariella Aïsha Azoulay is translated into an exhibiting format at Annenstrasse 53 and will continuously develop over the course of the next weeks.

Annenstrasse 53 will be open by appointment from 18 December until 7 January. Please email: milica.tomic(at)tugraz.at.

The online event and exhibiting format is hosted by Annenstrasse 53.

The event is financed by the State Government of Styria, Department 9 Culture, Europe, Sport in the framework of Exhibiting Matters.Triangulation, the latest installment of the IZK Lecture Series. 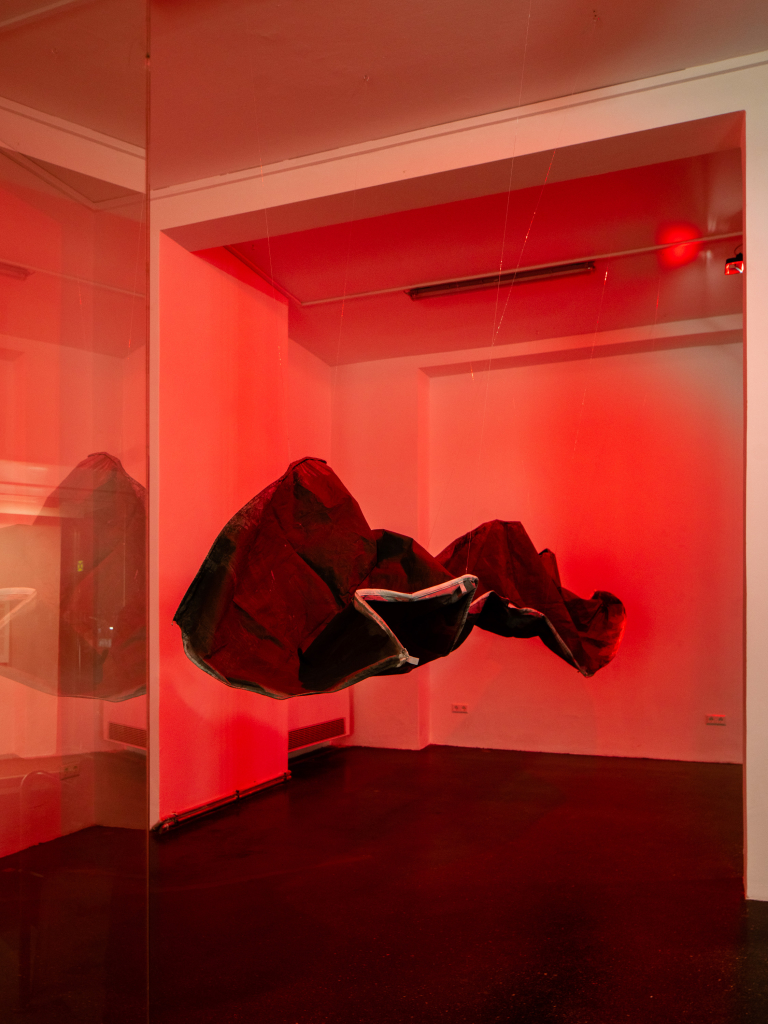 A flag is painted with photosensitive chemicals commonly used in analogue photography. When exposed to light, the applied chemicals will change colour, becoming darker with time.

Our first exposition at Annenstraße 53 is of a work that is the outcome of a process of reflection that Lorenzo Sacchi engaged with during the course, Art-based Investigation: Exhibiting the Thing, at the IZK – Institute for Contemporary Art, TU Graz. This course took place during the first phase of the COVID-19 pandemic in the spring of 2020. Struck by the sudden transformation of social relations towards restricted physical presence and prolonged confinement and isolation, students explored the idea of Exhibiting the Thing, from these new conditions. Considering the finished artwork under conditions of confinement, as well as processes of conceiving art, they asked if art exists before its exposure to the audience. How can art exist if it cannot reach the other? Students questioned the relationship that art has with an audience who know of its existence and long to encounter it, but have no access to it. This work, produced under such conditions, was first exhibited at the entrance of TU Graz in front of the Alte Technik, hoisted among other flags.

Lorenzo Sacchi writes: ‘A reflection on unfulfilled promises, expectations, future, and present as becoming -never-ending and product-less transformation and identity. A flag is used as a representation of a fixed identity or institutional status to be maintained, but in this case, the colours and the appearance of the flag are always changing and thus challenging the fixed relations. The media of photography is reduced to its photosensitive quality and used to express transformation while undergoing transformation. In this sense, the exposure of the work of art to the public corresponds to its photographic exposure and to its own realization in becoming, bonding the two processes together.’