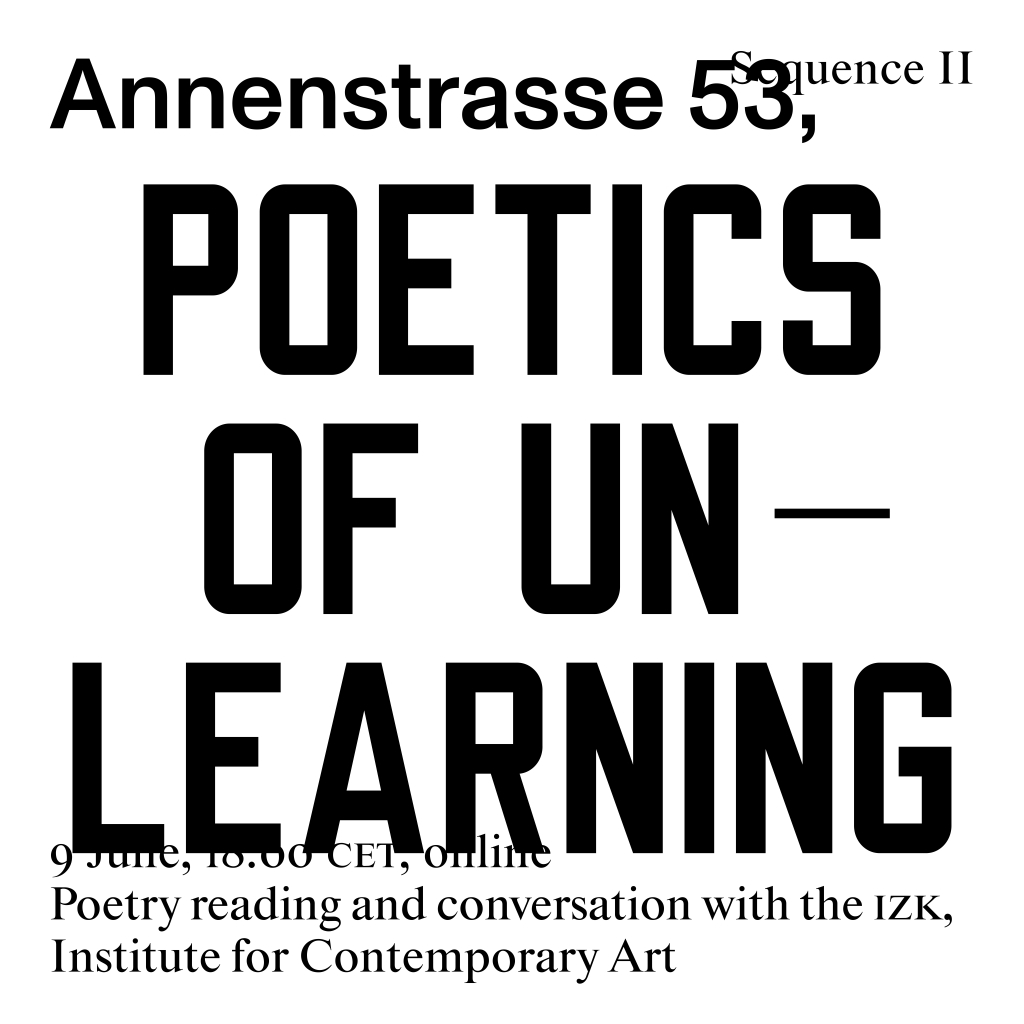 Myung Mi Kim, Momtaza Mehri and Christina Chalmers will join us online at Annenstrasse 53, for readings and conversation. Departing from the IZK semester-theme ‘unlearning’, our conversation will consider how a ‘poetics of unlearning’ brings together thinking, feeling and critique. What tensions, for example, between the roughness or smoothness of ‘learning’ and ‘unlearning’ might be produced? What limits, at the level of habit, pattern, model, language, translation and feeling are exposed in this process? Can we ‘unlearn’ the colonial-capitalist conditions that preside in our institutions? What is the scale of a poetics of unlearning? Where is its surface? What does it reach towards, or gather around itself? What shifts or ruptures might it produce?

>>> REGISTER for the Zoom link

Myung Mi Kim was born in Seoul, Korea. She immigrated with her family to the United States at the age of nine and was raised in the Midwest. Her collection of poems Under Flag (1991) won the Multicultural Publishers Exchange Award of Merit; subsequent collections include Civil Bound (2019), Penury (2009), River Antes (2006), Commons (2002), DURA (1999), and The Bounty (1996). An avant-garde poet who often employs fragmentary language and uses the white space of the page, Kim explores issues of dislocation, colonization, immigration, loss of her first language, and the fallout of history in her work. Myung Mi Kim is James H. McNulty Chair of English at the University at Buffalo, State University of New York.

Momtaza Mehri is a poet and independent researcher. Her work has appeared in publications such as Jewish Currents, Granta, Artforum, The Guardian, BOMB Magazine, and The Poetry Review.  She is the former Young People’s Laureate for London and a columnist-in-residence at the San Francisco Museum of Modern Art’s Open Space. Her latest pamphlet, Doing the Most with the Least, was published by Goldsmiths Press.

Christina Chalmers is a poet and doctoral candidate in Comparative Literature at NYU, researching the relationship between the philosophy of history and the critique of the family in post-war Italy, focusing on notions of inheritance, generation, reproduction and transmission. She has produced a research film on critical distance and disaster preparedness (Exit Strategies, 2019), published book chapters on experimental film, and translated books on philosophy and psychoanalysis from Italian to English (such as the works of Elvio Fachinelli and the book, Blinding Polyphemus, Geography and the Models of the World by Franco Farinelli). Her published poetry includes Work Songs (Shit Valley Verlag: 2013); Willingness (Materials: 2016) and most recently, Truant of the Stintless Sun (1080 Press: 2021). Her forthcoming book Subterflect (Distance No Object: 2021) will be published this summer.

Annenstrasse 53, is an exhibiting space which aims to establish a clear division between an Exhibition as a representational form, deeply rooted in colonialism and embodying imperial modes of representation, and Exhibiting as a continuous, open-ended process, characterised by the deliberate refusal of temporal and spatial closure. Exhibiting takes place in a moment wherein it is not objects and works that are exposed, but rather, we expose ourselves to the complex questions that are given by our historical conditions. By slowly adding and subtracting artefacts, publications, artistic works and conversations, we evoke exhibiting as a continuous process which aims to establish discourses in flux.

Poetics of Unlearning is connected to the ‘The European Dream’ a collaboratively written script and performance addressing the ideologies of Europe, its colonial history and border regimes. It is produced within the IZK MA seminar, Through the Looking Glass, the Realities We Found There, led by Rose-Anne Gush, and it will be performed at Halle fuer Kunst Steiermark on 2 June, 2021. More information here. 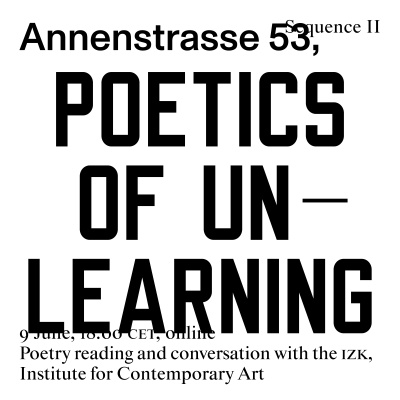 This event is connected  to the course: Through the Looking Glass, the Realities We Found There