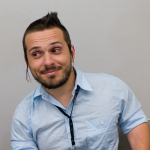 Tomislav Medak is an activist and philosopher interested in political philosophy of the Internet, media theory and aesthetics. He is an advocate of free software and free culture, and the Lead of the Creative Commons Croatia. He works as coordinator of theory and publishing activities at the Multimedia Institute/MaMa (Zagreb, Croatia). Tomislav is an active contributor to the Croatian Right to the City movement. He is an author and performer with the internationally acclaimed collaborative performance collective BADco based in Zagreb. With Marcell Mars he has organized a number of activities around the Public Library project, including HAIP festival (Ljubljana, 2012), exhibitions in Württembergischer Kunstverein and Galerija Nova, as well as coordinated digitization projects Written-off (2015), Digital Archive of Praxis and the Korčula Summer School (2016) and Catalogue of Liberated Books (2013 and on). He’s frequently writing on politics of technological development, and politics and aesthetics.

Visiting Professor at IZK in the winter semester 2016/17. He will be teaching the Workshop 1 together with Marcell Mars and Femke Snelting.