Working primarily across the mediums of lecture, essay and film, the work of Ho Rui An probes into the shifting relations between image and power, focusing on the ways by which images are produced, circulate and disappear within contexts of globalism and governance. Drawing upon his ongoing engagement with vernacular cinema—moving images that gain form and currency through socially embedded acts of witnessing that exist outside the formalisms of cinema “proper”—this lecture considers two such instantiations of this seemingly untenable category. 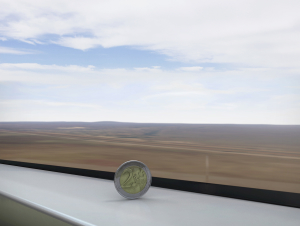 The first is the dashcam recording that has proliferated in recent years, as seen in the vast accumulation of crash footage—the most sensational of which feature speeding luxury sports cars—on the Internet, captured by cameras installed on dashboards the world over. The second, likewise attached to a moving vehicle, is the Coin Test China High-Speed Rail video, which shows a standing coin being balanced on the window ledge of one of China’s many high-speed trains to test the train’s stability. Reading these two optical-motor schemata against each other in the political present, the lecture examines the ways by which the discontents of late capitalism become observable, and by extension, are imagined as governable, not least by recourse to racialisation through the unstable figure of the Chinese capitalist subject.

Ho Rui An is an artist and writer working in the intersections of contemporary art, cinema, performance and theory. Working primarily across the mediums of lecture, essay and film, he probes into the shifting relations between image and power, focusing on the ways by which images are produced, circulate and disappear within contexts of globalism and governance. He has presented projects at the Gwangju Biennale (2018), Jakarta Biennale (2017), Sharjah Biennial 13 (2017), Kochi-Muziris Biennale (2014), Haus der Kulturen der Welt, Berlin (2017), Jorge B. Vargas Museum and Filipiniana Research Center, Manila (2017), NTU Centre for Contemporary Art Singapore (2017) and Para Site, Hong Kong (2015). In 2018, he was a fellow of the DAAD Berliner Künstlerprogramm. He lives and works in Singapore and Berlin.

The lecture is part of Exhibiting/IZK Theory Lecture Series and is organised in cooperation with Künstlerhaus Halle für Kunst & Medien.